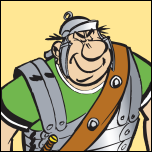 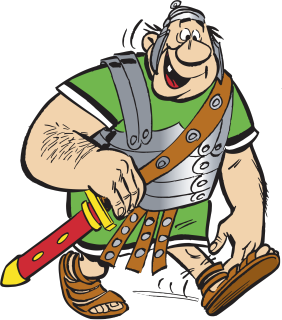 In the camp of Compendium, the Romans try to outdo one another in incompetence! Crismus Bonus, made to look ridiculous by Asterix and Getafix, was on tenterhooks before being cast into exile in outer Mongolia by Caesar himself, Caligula Minus meanwhile was discredited after having once again proved his legendary stupidity, Marcus Ginantonicus saw his enthusiasm rewarded with a bevy of slaps from all quarters

To regain a little prestige for this thoroughly humiliated troop of soldiers, it was necessary to find a legionary who was pure of heart, successful and formidable. The writers at Asterix clunked heads and finally chose Tullius Octopus! A mountain of muscle at the orders of his superior, Tullius Octopus is a deserving soldier: give him a mission and you'll soon see him return confident of a job well done. He was thus able to capture Getafix in the Gaul forest and followed this up by being the only soldier capable of laying his hands on strawberries out of season, just what a mocking Getafix was demanding in order to concoct some magic potion.

With every success, his Centurion Crismus Bonus rewards him by granting him permission to go to Rome to see all the fun of the circus. This in turn presents us with the opportunity of seeing him deliriously happy, joyfully attending a show that, in those days, was not in fact graced by many clowns It's his very naivety that saves him.

When the druids Albert Uderzo and René Goscinny direct their scathing, irreverent gags at the glaring stupidity of the self-proclaimed Empires, they always spare those individuals who, in that brutish world, manage to keep an innocent world view. Quod erat demonstrandum!