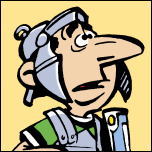 Marcus Ubiquitus and Julius Monotonus, legionaries of the third cohort, are not the type to stand around twiddling their thumbs. On the contrary, they tackle problems head on, and this time they decide to search for two frightening Goths who are wandering with impunity around the Roman territory.

But when it turns out that the two «barbarians» in question are none other than Asterix and Obelix, it is obvious that Monotonus and Ubiquitus have got the wrong end of the stick. And indeed, not content with giving them a deserved trouncing, Asterix and Obelix take possession of their uniforms to become Asterus and Obelus, so as to pass behind Roman lines unhindered.

Worst of all, Ubiquitus and Monotonus are then captured by two other legionaries (who are convinced that they have captured the Goths) and are forced, wrists and ankles bound and wearing only their rather tasteless underpants, to prove to their superiors that barbarians they are not! Join in, they said

3 - Asterix and the Goths